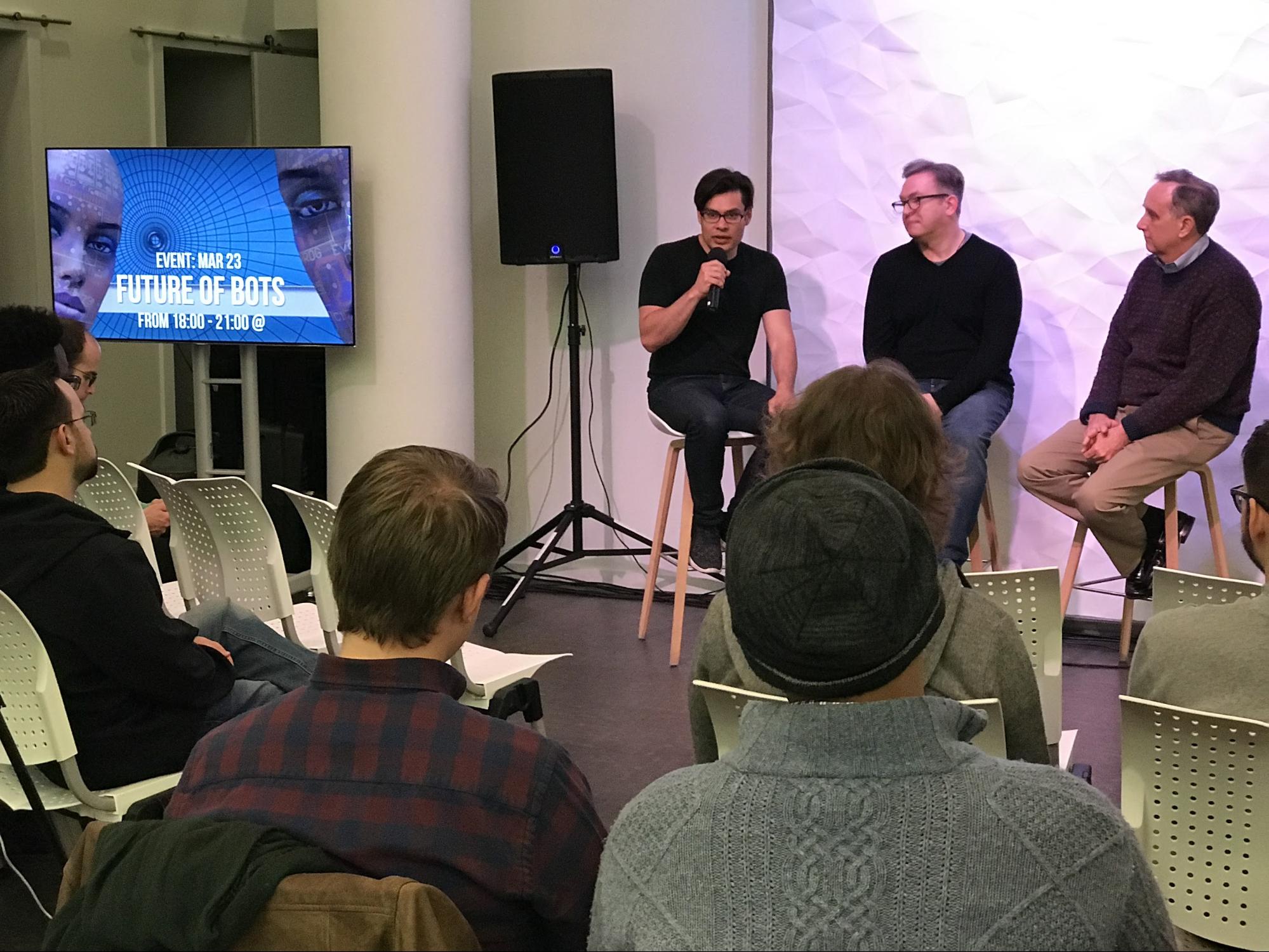 As mentioned in a recent DG Lab article, we are moving from the era of SNS to the era of chat-based applications. Chatbots are decades old now, but recently there has been an explosion of accessible instant messenger “bots”. The ease of building these bots has spawned increasingly hands-on AI experimentation.

On Thursday 23 March 2017, Dan Saffer, a robot designer, and Hugh Dubberly, a design planner and teacher, perched on stools for a panel with Dan Gailey, a bot monetizer. Before them sat roughly two dozen bot enthusiasts in the high tech confines of DG717, a Japanese-flavored event, coworking, and incubation space on Market Street in downtown San Francisco. This Future of Bots event was part of a series of AI talks hosted by DG Lab, a commercial tech research platform, aiming to learn from smart people in Silicon Valley as we work together to build next generation global businesses. 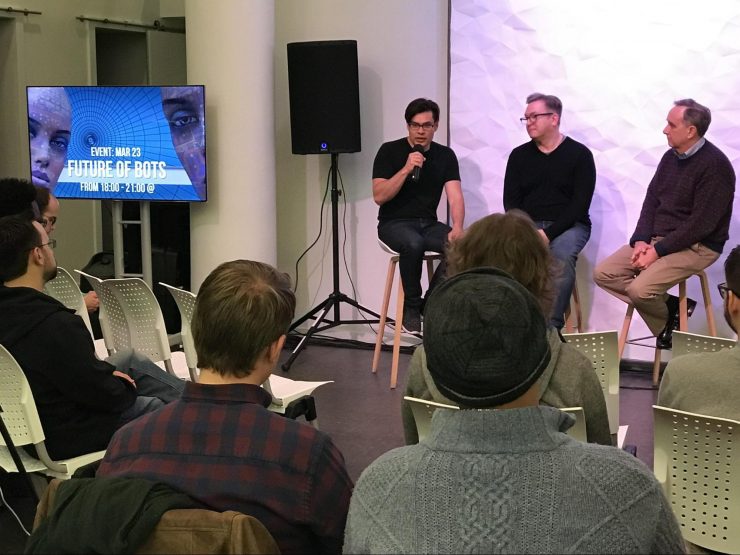 Dan Gailey convenes the panel with designer Dan Saffer in the middle and futurist Hugh Dubberly on the right. 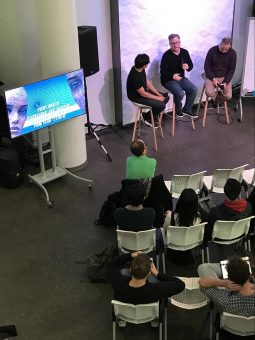 Dan Saffer speaks to the Future of Bots as a man in a green shirt leans forward to listen.

Saffer imagined a future bot acting as his personal agent, fielding emails and calls: you reach out to me, first you have to converse with my representative assistant bot. In the background this bot is surveying the world on my behalf, queuing up local news like high school sports. Another panelist cited “The Daily Me” – a personalized newspaper assembled by computer intelligence envisaged by former MIT Media Lab Director Nicholas Negroponte.

Saffer spoke of searching for the right personality to skin on these bots we’re building; is this bot working with me a toy or a too?

Dubberly was excited to see how “combinatorial innovations” will lead to big AI breakthroughs. If we can cheaply make and widely embed sensors and cameras in our environment, we end up with a ton of data. We upload that data to the cloud, we summon machine learning software and hardware to consume the data, and then we let humans flag the important patterns. As a wide range of hardware and software innovations take hold, they create new platforms for greater innovation. Or, as musician Brian Eno put it: “You should stay alert for the moment when a number of things are just ready to collide with one another.”

Future of Bots panelist Hugh Dubberly leans towards a wood DG717 logo embedded in a wall of living moss.

To give one specific example, Dubberly imagined rich opportunities for Artificial Intelligence and machine learning within CRM Customer Relationship Management) software; roaming through correspondence and contacts for potential opportunities. Making the best of these opportunities will require a truly aware organization. The first wave of corporate IT work centered around projects like “let’s get our HR systems and payroll online.” Now the world of AI and big data presents an opportunity for companies to sense the world outside and respond.

The Audience is the Future

The event host Dan Gailey is working on RadBots, a monetization platform for chatbots. Before the panel started, Gailey invited up members of the audience to describe bot projects they were working on. 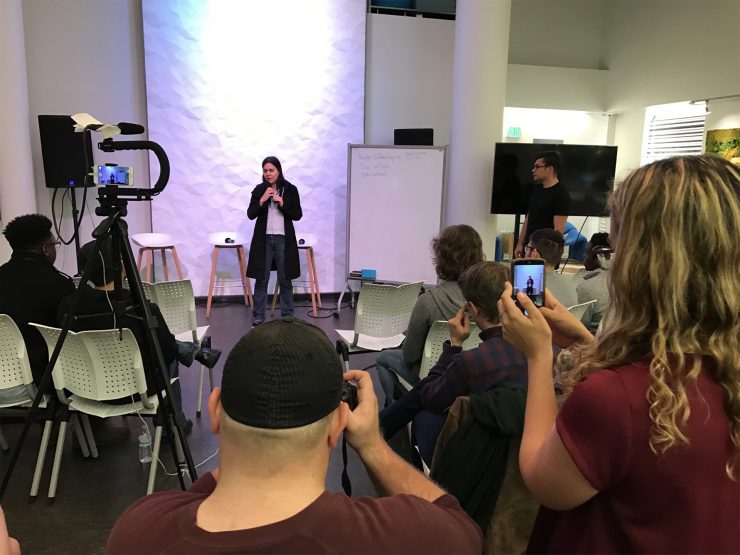 Ruth Polachek the CEO & Co-Founder of FinCheck, makers of the RapidCFO bot scraping your email for receipts to automatically load into expense reports.

Sam Udotong the Co-Founder of Fireflies.ai, offering language based project management through the Slack interface. 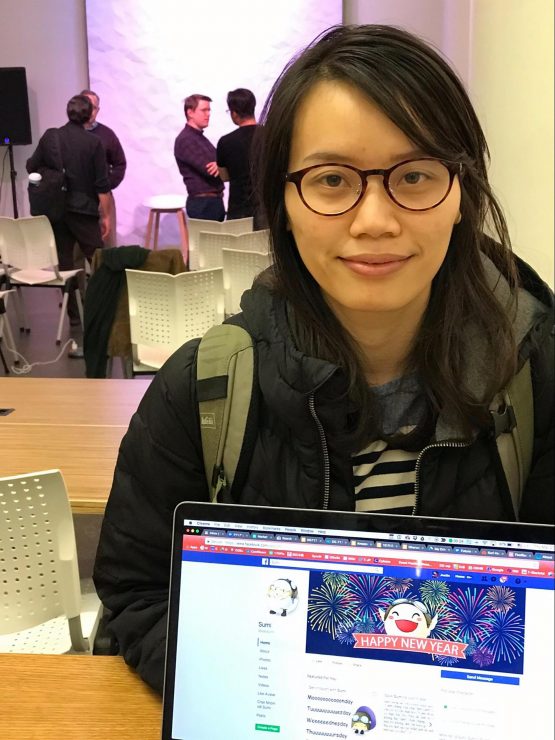 Tam Le with Sumi, a chatbot maker based in Viet nam with an audience of hundreds of thousands of teenagers. She’s seeking investment outside of Vietnam, and also promoting her team of 4 people back in Vietnam as outsourced botmakers.

After the panel spoke, the audience was able to ask questions.  Someone asked about the potential for bots to be encoded with manipulative, sociopathic tendencies. In order to give people a chance to avoid deceptive bots, the panelists wondered if bots should be forced to identify themselves as such, the way advertising is often specifically labeled.

But according to much of this Future of Bots discussion, bots boost efficiency and convenience more than social change or revolution. The audience set a brisk pace of experimentation at this Future of Bots event, and anecdotally, most of the bots they were working on were solving business-to-business problems. Perhaps the near future of bots will not be a personal assistant but rather a corporate one.

Héctor was born in Spain in 1981. After earning his MSc in computer science and working for CERN in Switzerland, he moved to Japan, where he worked on voice recognition software and consumer internet technology companies. From July 2016 he is the Chief Architect at DG Lab focusing on five main research areas: Biotechnology, AI, Blockchain, Security and VR. On his free time he loves to write books about Japanese culture. Two of the books authored by Héctor have become international best sellers.

Since 2015, Justin Hall has served as the Community Manager at DG717: a coworking, incubation, events space, and the Digital Garage US headquarters. Before DG, Hall worked with DeNA as “Director of Culture and Communications” in their San Francisco Office. Hall was a freelance journalist based in Tokyo 2001-2003 covering the launch of FOMA & i-Mode. Between 2007-2009, Hall was CEO of GameLayers, a VC-backed startup company building an MMO game in a Firefox toolbar. His personal web site Links.net has been called the first blog. Today for fun Hall produces “Justin Hall Show” videos from his home and enjoys time with his partner and child. 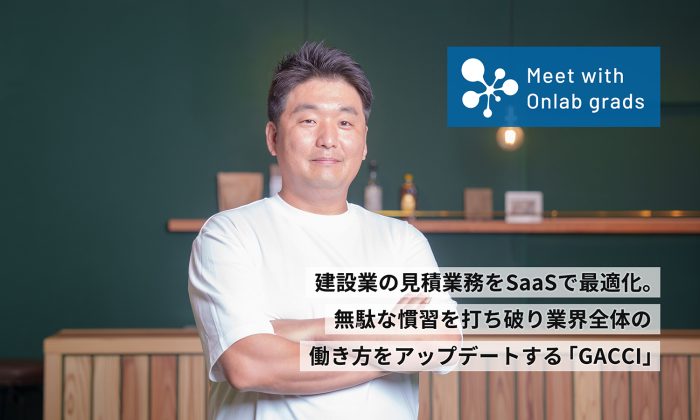